Are rapid COVID-19 tests the way to get everyone traveling again?

Eight months into the COVID-19 pandemic, infections are skyrocketing. With air passenger traffic at 34% of what it was pre-pandemic, and travelers hungry to get back on the road and into the skies, the scramble to find a solution is on.

Vaccines hold promise, but widespread production and use could be months away. As the industry continues to explore ways to jumpstart travel, some airports and airlines have a potential solution to make flying safer and easier — COVID-19 tests. But is testing a silver bullet, in the absence of a vaccine? Here’s what we found.

The push for testing

Airlines, cruise lines and destinations around the world are requiring mask wearing, increased the disinfecting of planes and improved air filtration, among other efforts, since the pandemic hit. Now a growing number are offering COVID-19 testing in the hopes of stopping sick passengers from boarding planes and entering countries while allowing others to avoid quarantines once they reach their destinations.

Travel industry groups have been pushing for the widespread use of COVID-19 testing to bypass travel bans and quarantines, which they say are hurting air travel. In September, the International Air Transport Association (IATA), which represents 290 airlines, called for the development and deployment of rapid, accurate, affordable, easy-to-operate, scalable and systematic COVID-19 testing for all passengers before departure as an alternative to quarantine measures as “the key to restoring the freedom of mobility across borders.”

Slow or rapid: How different kinds of tests measure up

Public health experts believe that widespread testing for travel, however, is just not that simple, since COVID-19 tests aren’t all created equal. PCR tests are considered the gold standard, but are more expensive than other kinds of tests, in addition to the challenges they pose around timing. Rapid tests, including molecular and antigen tests, are appealing because they deliver quick results.

PCR – short for polymerase chain reaction – testing is widely believed to be the most accurate COVID-19 testing available, with 71%-98% sensitivity, according to the British Medical Journal. This is the kind of test that most countries are currently requiring for entry. The problem? These tests must be sent out to a lab, and travelers risk that they won’t get results within the necessary window to board their flight or enter their destination. These windows vary from country to country, but many require a negative result from a PCR test taken within 72 hours of departure or arrival. Without predictable and fast results, all or part of a trip can be put in jeopardy.

A potential answer to this problem? Rapid testing. These tests, usually administered as a nasal swab, can be analyzed on the spot and do not require a lab – a potential boon for travelers and travel companies alike.

“This first generation of rapid result tests are the first step towards something that will, I hope, be useful. They are certainly a positive development and they will contribute towards international and potentially, if we need it, to domestic travel,” says Henry Harteveldt, a travel industry analyst at the Atmosphere Research Group, a travel industry market research firm. “If you take a rapid result test before your flight, and […] one is required after, and that means you’re either exempt from a quarantine or the quarantine is reduced to what we might consider something reasonable, let’s say 24 hours, then it’s definitely going to help.”

But health experts caution against putting too much faith in rapid tests.

“Rapid tests have a lot of benefits, the [fast] turnaround time is really crucial in a lot of different settings. But the issue with the rapid tests is that their level of accuracy can often be lower,” says Dr. Makeda Robinson, an infectious disease expert at Stanford University. These tests, she adds, could give travelers a false sense of security. “When people feel as though the test has been rubber-stamped, they assume the results they get back are 100% precise. ”

So far, no U.S. airline is requiring a negative COVID-19 test to fly, but some have started offering tests at the airport if they’re traveling to destinations that require proof of a negative test. United Airlines and American Airlines, for example, are offering pre-flight rapid testing for destinations such as the Caribbean and Hawaii. The latter destination now lets travelers skip the mandatory two-week quarantine if they can show a negative FDA-approved test result. A few major U.S. airports now also have on-site rapid testing, including Newark, New York’s JFK, Tampa International Airport and San Francisco (SFO), joining international hubs such as London’s Heathrow Airport that are doing the same. 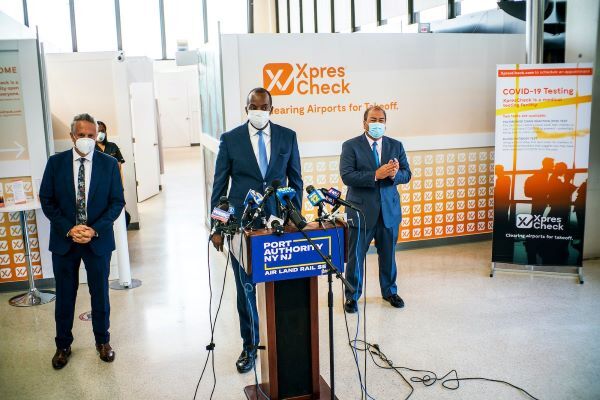 Testing partnerships with destinations may also be an answer. JetBlue announced that passengers heading to Aruba would have access to PCR testing via its partner, Vault, through an agreement with Aruba Tourism Authority. Travelers who request it – a PCR saliva home test that is performed with the guidance of a Vault staffer via video chat – can carefully time the test so that results arrive exactly in time for their trip.

The trouble with testing

“Every test is a snapshot,” says Dr. Gigi Kwik Gronvall, a senior scholar at the Johns Hopkins Center for Health Security. “Your result is only true for that time that you took the test. So for somebody who tests negative upon arrival, especially using the less sensitive test, the next day they could be very positive. So you probably will miss cases. Will you miss fewer of them? That’s more likely than if you did no testing at all.”

Robinson agrees that rapid testing can be helpful, and says there’s been improving test accuracy and sensitivity. Rapid tests are also becoming more available as new manufacturers and innovations enter the space. But she cautions against using rapid tests to totally do away with quarantine periods, particularly for international travel.

“The real question here is how long is your incubation period before you develop symptoms? This time window can be quite variable with this virus,” she says, adding that most people have symptoms within a week. Given that, “having a pre-flight test, a shorter quarantine and a post-flight test could be a reasonable solution” to cut down but not eliminate quarantines.

Testing as a first step – not a complete solution

Testing, experts say, is also only one part of the equation. Travelers must still take other precautions to stay safe, like wearing a mask, washing their hands, keeping physical distance from other travelers, and being outside as much as possible.

Still, a recent IATA survey shows that travelers are in favor of COVID-19 testing, with 88% willing to undergo testing as part of the travel process, and that testing would help rebuild passengers’ confidence in air travel. It’s too early to tell if rapid tests will be the key to boosting domestic and international travel, especially with COVID-19 surging in many U.S. states and European countries. But with things changing so quickly on the testing front, they hold much promise.

“What I think is really good is that we’re now seeing a number of different airlines try a number of different approaches and solutions, and inevitably a few winners will emerge, winners based on accuracy of test results, efficiency of how they can be processed, and how passengers feel about the test,” Harteveldt says. “I expect that within just perhaps even a few months we may start to see some winners emerge.”