Is Disney World The Harbinger of Good Things to Come?

When Walt Disney World reopened in Orlando, Fla. in July, it did so under an extraordinarily strict set of circumstances.

It cut capacity to just 30 percent. No hugging Mickey, Minnie or any other character for that matter. Face masks at all times. Temperature checks. Constant cleaning and sanitizing.

Yet it faced criticism since the state of Florida was in the midst of a resurgence of COVID-19 cases at the time.

Well, three months after reopening, Disney World just might be a harbinger of good things to come in terms of mass gatherings, fans at sporting events, concerts and more.

In a terrific story by Brooks Barnes in the New York Times, cases of the virus have been few and far between at WDW and the worst fears about the theme park reopening have not been realized – despite the fact that Florida residents have made up about 50 percent of attendance since the reopening.

“The data shows that we opened responsibly,” Dr. Pamela Hymel, chief medical officer for Walt Disney Parks and Resorts, told the Times. “We didn’t cause a surge.”

Trimming capacity at the parks – still at just 50 percent despite Florida Gov. Ron DeSantis declaring the state could completely reopen – and a reduction in staff members have certainly helped. Though Disney declined to give the Times any numbers on how many employees had tested positive, the park’s union leaders told the paper the safety measures are working.

“We’ve had very few, and none, as far as we can tell, have been from work-related exposure,” said Eric Clinton, president of UNITE HERE Local 362, which represents roughly 8,000 attraction workers and custodians.

“So far — so far — it has been a success story,” said Julee Jerkovich, a United Food & Commercial Workers official. “As a union rep, I do not say that lightly.”

“We have no issues or concerns with the major theme parks at this point,” said Dr. Raul Pino, director of the Florida Department of Health in Orange County, which includes Disney World.

Whether this helps Disneyland in California remains to be seen. Gov. Gavin Newsom, citing coronavirus concerns, has refused to allow California theme parks to reopen; Disney, citing the efficacy of its safety procedures in Florida, has pressured him to reconsider.

Every other Disney resort has reopened though, including those in Paris, Shanghai, Hong Kong and Tokyo.

“The safety protocols — the cleaning and the social distancing and the mandatory face coverings — have really proven to be workable,” said Paul Cox, president of the stagehands local. “The worst fears have not come true.” 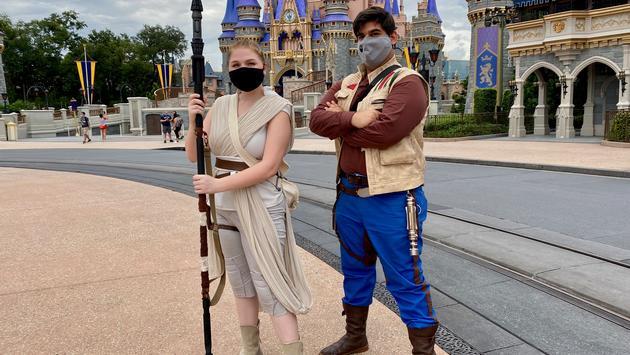